> Storico Convegni>2nd Symposium on Surgery of the Spastic Upper Limb 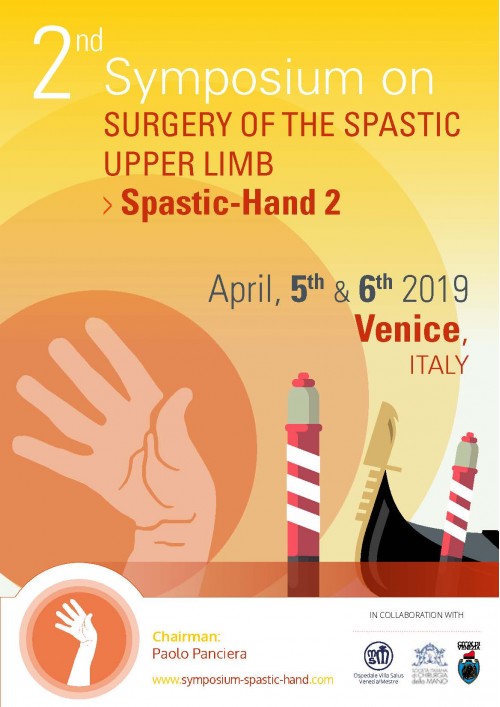 2nd Symposium on Surgery of the Spastic Upper Limb

Last but not least it is easy to reach for whoever is staying in a hotel in Venice.

Each tour needs a minimum number of people to be activated.

Please fill in the form with your tour option and number of people taking part and wait for it to be confirmed.

No payment is required, you can pay in cash (only Euros accepted) directly at the Symposium.

The tour starts in Piazzale Roma and with a short walk will take you away from the crowds into the district of San Polo, the oldest part of Venice. Among the many monuments we see on this walk is the Scuola Grande di San Rocco, still today active confraternity of lay people founded in 1478. Jacopo Tintoretto, one of the most extraordinary artists of the Venetian renaissance, decorated the elegant renaissance building, completed in the middle of the 16th century, in over 20 years. The almost 70 canvases that cover the ceiling and the walls of this incredible building was meant to be the picture book of the bible for the salvation of the members of the “Scuola”.

The nearby Basilica of the Frari (Franciscan friars in Venetian dialect) is the second largest in the city, built over one hundred years it represents one of the most beautiful examples of gothic architecture in Venice.

The inside houses some of the most famous paintings by Titian included the world famous "Assumption of the Virgin” that he painted when only 26 years old and several funeral monuments of important Venetians that will help to retrace the history of the city.

Walking then through some narrow alleys of the former “red lights” district of Venice learning the story of the famous Courtesans like Veronica Franco we reach Rialto area where the tour ends.

This walking tour starts in Piazzale Roma and explores Santa Croce and Dorsoduro two of the less touristy areas of Venice.

Walking away from the usual tourist itineraries this itinerary takes you into a special neighbourhood where fishermen and craftsmen used to live and that is still quite alive because of the many students that frequent the local university located in this part of the city. We visit the church of San Nicolò dei Mendicoli, traditionally founded in the 9th century. This beautiful gothic building has preserved the charm and atmosphere of the past. The interior is known more for its homely and idiosyncratic collection of art and artefacts from almost every century of its life, then for individual works of art, a unique occasion for the tourist to understand the devotion of the common people of Venice.

From S Nicolò we continue the tour with visit of the Church of San Sebastiano, almost entirely decorated by Paolo Veronese, the most elegant and colourful artist of the Venetian ‘500. The simple outside architecture of the church contrasts with the opulent decoration of the inside that Veronese completed in almost 15 years of work.

A leisurely walk along the sunny “Zattere” with the possibility to stop for a gelato at “Nico’s”, traditional Venetian gelato place since early 1900’s and nearby we can see one of the last places left in Venice where they still built gondolas. The walk ends by the Accademia Bridge from where people can easily reach St. Mark’s Square or go back to Piazzale Roma.

This site uses cookies. By continuing to browse the site you are agreeing to our use of cookies. Find out more here